A dash can introduce further information and can be used instead of a colon, a comma or, occasionally, brackets. After the dash, there may be a list or a main or subordinate clause.

For example: The fire spread quickly – I was scared. We catch the bus – the blue one – at 3.15pm at the station.

Books which have been carefully written, using a gradual introduction of new letters and sounds, so that children can practise their developing reading skills.

To read a word by saying the sounds then joining, or blending, those sounds together to form the word.

The bottom number of a fraction is called the denominator. The denominator tells us how many equal parts the quantity or shape has been divided into.

For example: In ½, the denominator is 2.

A determiner goes in front of a noun and its adjectives to help to tell you which person or thing the sentence is about, or how much or how many of them there are.

For example: The little green bird pecked one juicy apple and ate it as he sat on a branch.

A digraph is a sound made up of two letters together such as ‘ch’ or ‘ee’ or ‘ll’. See our phonics made easy page for more information about learning to read wtih phonics.

When people’s exact words are written down in inverted commas, this is called direct speech.

For example: “I’m beginning to understand,” he said.

Division is sharing, grouping or separating a number into equal parts. Children use lots of different techniques to divide; take a look at our Division Youtube playlist for detailed guidance.

Short division and long division: The process of dividing a smaller number into a larger number, one digit at a time, starting on the left. This means working from the largest to the smallest place value, effectively rounding the final digits of the large number at each step. Short division involves 'carrying' numbers between place values, whereas long division involves writing down the answer to each step, so is more useful for dividing by larger numbers.

Video: How to do short division

Video: How to do long division

Chunking: Chunking is sometimes used as a way of estimating or checking division calculations. Using multiples of the number that the total has to be divided by breaks down the calculation into sizeable 'chunks' that are subtracted from the total. A first step in a calculation such as 615 ÷ 20 could involve subtracting 'chunks' of multiples of 20, one step at a time.

Video: How to do division by chunking

A specific learning difficulty which mainly affects the development of literacy and language-related skills. For further information, visit www.bdadyslexia.org.uk.

When one or more words are missed out because it is obvious what is meant.

For example: We’re off to the park. I can post your letter. [‘On the way to the park’ has been left out.]

Ellipsis also refers to three dots meaning that a word has been missed out or a sentence has not been finished – for instance, to suggest tension.

For example: The door handle turned, a cough was heard, and…

An exclamation mark comes at the end of an exclamation. It shows that something is being exclaimed, or said with a lot of feeling.

An exclamation mark can also come at the end of a command.

For example: No! Run! Stop it!

The Early Years Foundation Stage sets standards for the learning, development and care of children from birth to five years old.

A factor is a whole number that will divide exactly into another number.

Numbers that multiply together to make a particular number.

An emphasis on numeracy skills, using money and working with percentages.

Cards to use in games to help children practise recognising, at speed, a letter, group of letters, words and/or pictures.

The standard procedures used for calculations that cannot easily be solved mentally. These include:

Video: How to do short division

Video: How to do long division

Numerator: The top number of a fraction is called the numerator. The numerator tells us how many equal parts there are.

Denominator: The bottom number of a fraction is called the denominator. The denominator tells us how many equal parts the quantity or shape has been divided into.

For example: In ½, the denominator is 2.

For example: ½ is a unit fraction, because the numerator is 1.

For example: ⅔ is a non-unit fraction, because the numerator is 2.

For example: 3/2 is an improper fraction, because its numerator (3) is bigger than its denominator (2).

For example: 7/3 (an improper fraction) can also be represented as 2 ⅓ (a mixed number).

Video: What are fractions? 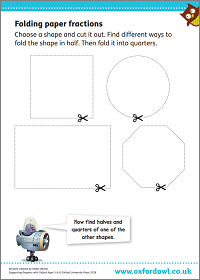 To say the individual sounds that make up a word in the Read Write Inc. Phonics reading programme. Elsewhere sometimes called Robot Talk or Sound Talk.

Video: What are fronted adverbials?

A full stop comes at the end of a sentence. It shows that a sentence is complete and finished.

For example: It is a full sentence. I am the tallest in my class.

There are several different ways to talk about the future in English:

The verb 'will' followed by the infinitive of the verb.

For example: I will leave next week.

The verb 'will' followed by 'be' and the present participle.

For example: I will be leaving next week.

The present progressive of the verb 'go' followed by 'to' and the verb.

For example: I am going to leave next week.

The present progressive of the verb.

For example: I am leaving next week.

The present tense of the verb.

For example: I leave next week

Schools sometimes use the grid method as a way of visualising multiplication, as part of formal calculations. For example, to work out 35 × 8 using the grid method, you set the numbers out in a grid:

You then multiply the numbers and add them together to find the total:

Similar to guided reading, but children take it in turns to read aloud from the same book whilst the teacher listens and supports.

About six children, grouped by reading ability, read aloud from the same book at the same time whilst the teacher listens in and draws out teaching points. At junior levels children may read a book, or part of it, away from the session and then focus on particular aspects of understanding in the session.