In a sentence with an active verb, the subject of the verb is doing the action. This is called the active voice.

For example: Hilda strode into the goal area.

Video: What are active and passive sentences?

For example: The little, green bird pecked the juicy apple. The apple was delicious.

An adverb gives more information about a verb, an adjective, another adverb or a clause. An adverb tells you how, when, where or how often something happens.

For example: Later, a cat crept up the tree as the little green bird eagerly pecked the juicy apple twice and ate it noisily.

For example: Fortunately, we won. However, the other team played well.

Some adverbs are used to say how likely or possible something is.

For example: We’ll definitely come to the party.

Some adverbs are used for emphasis.

For example: The bag was terribly heavy.

A word or phrase that gives more information about a verb or clause. An adverbial can be an adverb, a phrase or a subordinate clause.

Video: What are fronted adverbials?

This code shows us the relationship between the sounds of our speech (phonemes) and the written letter(s) of the alphabet and how these are used to match those sounds.

When something has more than one possible meaning.

Words that mean the opposite of each other, such as wet and dry, full and empty, open and closed. The opposite of an antonym is a synonym.

Video: What are synonyms and antonyms? 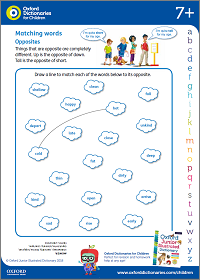 An apostrophe can be used to show when a word has been made shorter by dropping one or more letters. This is called a contraction. You usually use contractions in informal writing or when writing direct speech.

For example: the boy’s pen.

If a singular word ends in -ss, still add ’s:

For example: the princess’s crown.

For example: the girls’ bags; the visitors’ car park; the calves’ horns.

Video: How to use apostrophes

Shapes or objects arranged in a rectangle are called an array. Egg boxes or muffin trays are good examples of arrays. Teachers use these to help children to 'see' multiplication. For example, if you have a tray of muffins that is four muffins along and three muffins deep, there will be twelve muffins in total. 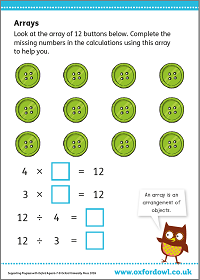 The words 'the', 'an' and 'a' are called articles. They are a type of determiner.

The determiner 'the' is the definite article.

For example: The book is on the table.

The determiner 'a/an' is the indefinite article.

For example: Bring me a book.

When we talk about averages in everyday life, we are usually referring to the mean average. This is the sum of the numbers in a set of data, divided by the number of members of that set. So if we wanted to know the average age of a group of children, we would add up all their ages and divide by the number of children.

There are two other types of average that children may come across in maths. They are:

Video: What are averages?