A group of linked sentences that are usually about the same thing. A new paragraph starts when you are writing about a new idea, person, place or event.

For example: I looked up, squinting because of the sun, and saw the birds flying across the sky.

Partitioning a number means to split the number into smaller chunks. It is often used to break down numbers when multiplying or dividing larger numbers to make the calculation easier.

In a passive sentence, the subject of the verb is the one that has something done to it, so the do-er disappears or is mentioned after ‘by’.

You can tell that a sentence is passive because:
- The subject of the verb has the action done to it.
- There is part of the verb 'to be' (such as 'was' or 'is') or a verb like 'get', followed by a past participle.
- The person or thing carrying out the action is introduced by the word 'by', or not at all.

Video: What are active and passive sentences?

The smallest units of sound in a word represented by single letters or groups of letters.

Video: How to pronounce pure sounds

A method of teaching children to read and write the English Language. It teaches children that the sounds of English are represented by letters or groups of letter. (Also see synthetic phonics).
Find out more about phonics on our Phonics made easy page.

Video: What is phonics? 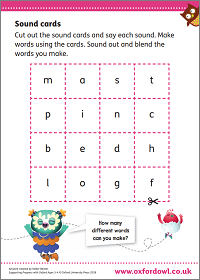 A group of words that can be understood as a unit.

For example: her table is a noun phrase.

Video: What are phrases and clauses?

Books in which the pictures play a major part in the story and the text is not levelled by difficulty (for example, The Gruffalo by Julia Donaldson). Picture books are not necessarily just for the very young and they can support the understanding of quite complex ideas (for example, Lost Thing by Shaun Tan).

Take a look at some of the latest picture books from Oxford University Press.

The value of a digit depends on its place within a number. This is its place value and it is the basis of our entire number system.

Video: What is place value? 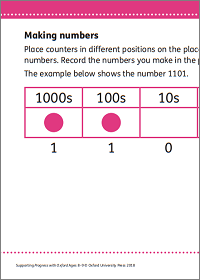 The plural of a noun is used when there is more than one. It is usually formed by adding –s.

Video: What are plurals?

A morpheme that can be added to the beginning of a root word.

Different prefixes have different meanings so, when you add a prefix to a word, you change its meaning and make a new word.

Video: What are prefixes and suffixes?

A preposition usually comes before a noun or pronoun. It often shows place or direction.

For example: A cat crept up the tree. Suddenly, the cat tried to pounce on the little green bird, but crashed into the tree.

Some prepositions show time or cause.

For example: After this, the cat was furious with the bird.

The progressive (or ‘continuous’) form is created by the verb ‘to be’ followed by the present participle of the verb. It describes an ongoing event.

For example: The bird is pecking at the apples. The cat was looking at the bird.

The past progressive, formed with the past tense of the verb 'to be', can show that something was in the process of happening when something else happened.

For example: I was going to the shops when I lost my glove.

A pronoun can be used instead of a noun. Using a pronoun avoids repeating the noun again and again.

For example: The bird pecked the apple and ate it as he sat on a branch.

For example: This apple is mine!

For example: The bird that sat on the branch was eating an apple.

The words where and when are also sometimes used as relative pronouns.

For example: This is the house where I grew up.

Video: What are pronouns?

Punctuation marks are used in sentences to make the meaning clear. Sentences can mean very different things if they don’t have punctuation.

Pure sounds are phonemes, the smallest units of sound in a word represented by single letters or groups of letters. It is important when saying pure sounds not to add an 'uh' to the end of the letter.

Video: How to pronounce pure sounds