SATs stands for Standard Assessment Tasks. These are national tests in spelling, punctuation, grammar and reading and maths taken by children at the end of both Key Stage 1 (Year 2) and Key Stage 2 (Year 6). Writing is assessed by the teacher.
You can find out more on our KS1 SATs and KS2 SATs pages.

To write or spell a word by listening for the sounds in the word and deciding which letters represent those sounds. We say you blend to read and segment to spell.

Children check their own work against a set of answers or criteria or swap with a partner to mark each other's work before then discussing the marking or comments. Proven to be an effective tool for learning.

A semicolon can be used between two related main clauses.

For example: The film was brilliant; I had a great time.

A semicolon can separate longer phrases in a list that has been introduced by a colon, or which is more complicated than a simple list of words.

For example: The children need to bring with them: a hot-water bottle or an extra blanket if the weather is cold; a cup, a plate and a bowl; a knife, a fork and a spoon.

For example: The bird ate the apple.

For example: The bird felt hungry and it ate the apple. [two main clauses]
Although it had already eaten, the bird ate another apple. [a subordinate clause followed by a main clause]

Video: What are sentences?

This term is used in curriculum documents and refers to work done with shapes, spatial awareness, (for example, volume and area) and measurements (for example, centimetres, metres and litres).

A teacher reads and discusses a text with the whole class, demonstrating how to be a good reader.

Words you need to learn by sight because they cannot be easily sounded out. (Also see tricky words).

The singular of a noun is used when there is only one.

To say the individual sounds that make up a word. (Also see Fred Talk.)

To say the individual sounds that make up a word (sometimes also called Fred Talk or Robot Talk).

An abbreviation often used in schools for spelling, punctuation and grammar. Also referred to as GPS.

A term used to cover a wide range of needs that may need additional support whether a child is falling behind or far exceeding normal expectations.

A sentence that tells you something.

For example: I love fruit.

The teacher reads a story aloud to the whole class. Take a look at our storyteller videos.

The subject of a verb is often who or what does or is something (the do-er or be-er). In a statement, the subject is usually the noun, noun phrase or pronoun just before the verb.

For example: The bird pecked the apple.

In a sentence, the subject and the verb agree.

For example: If I were able to take up a position with you, I would be diligent and punctual.
I note your requirement that applicants be experienced.

Video: What is the subjunctive?

For example: The bird pecked the apple before it flew away.

Video: What is a subordinate clause?

A morpheme that can be added to the end of a root word. Different suffixes have different meanings so, when you add a suffix to a word, you change its meaning and make a new word.

Video: What are prefixes and suffixes?

A word or part of a word that contains one vowel sound when you say it.

A syllable sounds like a beat in the word: 'Vow-el' has two syllables; 'Con-nec-tive' has three syllables.

Words that mean the same – or nearly the same – as each other, such as 'big' and 'huge', or 'horrible' and 'nasty'. The opposite of a synonym is an antonym.

Video: What are synonyms and antonyms? 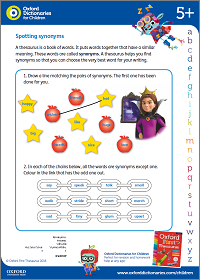 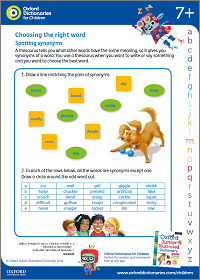 Blending or merging the sounds in a word together in speech so you can read the word.

Synthetic phonics is a way of teaching reading. Children are taught to read letters or groups of letters by saying the sound(s) they represent – so, they are taught that the letter 'm' sounds like 'mmmm' when we say it. Children can then start to read words by blending (synthesising) the sounds together to make a word. Read more about phonics >